Henny
Eleonora
From an early age, Henny learned the skills of wrestling and western boxing from his father and grandfather on his native island of Curaçao. Seeing that he had talent, Henny was introduced to the practice of Karate and continued his training until moving to the Netherlands with his family in 1978. During this time period, the exposure of Chinese Kung Fu to foreign countries was beginning to make traction and Henny quickly fell in love with the art form and found himself studying a relatively rare system of Kung Fu called “The Six Harmonies” under Master Deng Ji Xiang.
In 1984 the quest for more knowledge led Sifu Henny to Hong Kong, where he studied extensively with grand master Huang Xuanting. From 1987 to 2006, and upon the recommendation of his former instructors, he studied with Master Zhang Bingshen in Guangzhou and was introduced to multiple traditional martial arts systems such as XingYi, Bagua and Tai Chi. In 2009, he began learning from Zhang Shaofu, an 84 year old Liu He (Six Harmonies Kung Fu) Master from Cangzhou in Hebei. In 2012, following traditional Kung Fu customs, Sifu Henny and a team of his students from Holland, travelled to China and held an official ceremony recognizing Zhang Shaofu as their master.

Sifu Henny is widely regarded as a top representatives of Chinese Martial Arts. He has competed successfully in International Competitions, bringing home medals to be displayed alongside those of his students who’ve also competed throughout China. As a speaker, Sifu Henny has led training camps, workshops and seminars throughout North America, South America, Europe and China. where he also serves as a foreign ambassador to the Cangzhou Kung Fu association.

Currently, Sifu Henny continues to preserve the legacy of traditional martial arts systems through his school located in Amsterdam. Constantly evolving, he now focuses on the internal arts such as Dao Yin Qigong, Tai Chi, Ba Gua and Xing Yi. He also continuously hosts the Guo Shu Cup, a premier traditional martial arts competition which has attracted the attention of many notable Kung Fu masters and martial arts film stars from Hong Kong and Mainland China to attend the event which takes place annually in Europe. 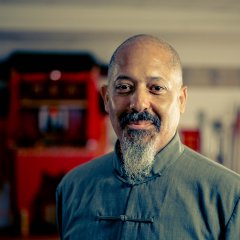